Geneva will become the capital of Africa

In the space of two days, Geneva will welcome the most important leaders of the African private sector during the 5th Africa CEO Forum. 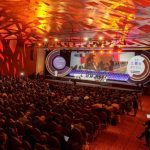 Created in Geneva by the event division of the group Jeune Afrique, the AFRICA CEO FORUM is back at the lake (or rather in its original cradle that is the Intercontinental) after a trip to Abidjan last year.

A return obtained in part thanks to the commitment of Vincent Subilia, Deputy Director and Head of International Affairs of the Chamber of Commerce, Industry and Services of Geneva. The latter had especially made the trip to Abidjan to discuss with the organizers. This appointment quickly become essential for the bosses of large family businesses on the African continent will take place from March 20 to 21 at the Intercontinental hotel, which will be fully privatized on this occasion.

No less than 1000 personalities are expected. The President of Senegal, Macky Sall, the Prime Minister of Ethiopia, Hailemariam Dessalegn have already confirmed their participation. The Vice President of Liberia, Joseph N. Boakai, and his Trade Minister will also be in Geneva. The theme of this 5th edition is Re-thinking Africa’s business model. For nearly 15 years, the continent has benefited from its natural wealth, attracted local and international investment in certain sectors, including telecoms, finance and agribusiness.

These achievements of the glorious decade should not obscure the fact that, in the absence of sufficient structural improvements, the diversification projects, industrialization, competitiveness and good governance of African economies have not all been completed. The private sector must play an even more central role in the sustainable transformation of the African economic model, “says Amir Ben Yahmed, President of the AFRICA CEO FORUM. “It is a question of bringing the debate on the evolutions that are necessary to succeed this new economic cycle.

Active leaders in Africa
Among the leaders of Swiss groups active in Africa who have confirmed their presence at this 5th Forum, include Diego Aponte, the CEO of MSC; Jean-Claude Gandur, the president of AOG; Nicolas Tamari, the CEO of Sucafina; or Markus Semer, president of the Kempinski hotel group. The leaders of the approximately 80 member companies of the Swiss-African Business Circle (SABC), starting with Cotecna and the Compagnie Benjamin de Rothschild, should also be present.

As recalled by Amir Ben Yahmed, the forum in question is the only one to reach this level in terms of the CEO and not to be confined to national or linguistic borders. This success is due to the sustainability and proximity of the Jeune Afrique group, which publishes a ranking of the 500 largest companies on the continent for 15 years.

According to Michael Rheinegger, director of the SABC, the top 8 Swiss companies active in Africa is the following (with the volume of trade):